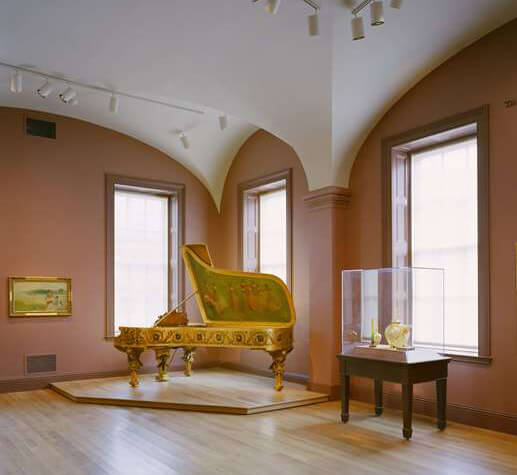 The old US Patent Office Building has survived fire, stood through the Civil War, and narrowly dodged the urban planner’s wrecking ball. Well into its second century, it needed restoration. A huge restoration project began in 2004 to restore the original beauty and charm to this venerable building, which became part of the Smithsonian in the 1950s. The project started with demolition and the much-needed removal of lead painted wood throughout the building. The lead removal treatment used left the beautiful old woodwork damaged and unfit to paint. The historic building had survived so much, only for the Museum to fear they would have to discard the original wood because of the poor paint removal job. The building has a long and storied history that needed to be preserved.

Constructed in 1836, the building is the third oldest in Washington, DC. It was modeled in part after the Parthenon in Athens, Greece. City planner Pierre L’Enfant originally intended the building to house a “church of the Republic,” but although the structure has survived several transformations, it never actually became a church. It did, however, hold our nation’s founding documents for many years.

In 1842 the US Patent Office moved into the building. Patents were issued there until 1932. During the American Civil War, the building was used as a hospital for wounded soldiers. It also housed a temporary barracks and a morgue. American Red Cross founder and nurse Clara Barton worked there as a volunteer nurse and poet Walt Whitman was a frequent visitor who read to the wounded soldiers. In 1865 the building was the location of President Lincoln’s Second Inaugural Ball where a $10 ticket admitted “one gentleman and two ladies”. In 1932 the Patent Office was relocated and the Civil Service Commission (later renamed the Office of Personnel Management) – which oversaw all non-military government employees – took over the building.

In 1957 the building was slated for demolition to make way for a parking garage, but public outcry saved the building from the wrecking ball. Congress authorized the Smithsonian Institution to use the structure as a museum in March 1958. The National Portrait Gallery (NPG) was authorized by Congress in 1962. It holds the only national collection of presidential portraits outside the White House.

In 2004, the Smithsonian began a $360M project to restore the entire building – which is 382,000-sq.ft. and spans two city blocks. Once the restoration was complete, the building would continue to house the National Portrait Gallery as well as what was slated to be called the Donald M. Reynolds Center for American Art and Portraiture. (Later renamed the Smithsonian American Art Museum). The well-worn historical woodwork and paneling had been severely damaged during lead abatement. Caustic chemicals had been used to remove lead paint without consideration of the damage it might cause the woodwork; after treating the wood with chemicals that left the surface with a fibrous, fuzzy appearance, metal tools were used to scrape the paint from the already damaged surface leaving behind unsightly gouges. The Museum thought the woodwork was beyond repair and they were seriously considering wholesale replacement of the damaged woodwork rather than preservation.

A phone call to M&A Architectural Preservation brought Rich Muckle to this venerable and historical building. After examining the wood work Rich determined that the wood wasn’t neutralized properly, and the pH was far too high to accept any restoration procedures or paint. It had to be neutralized and tested again for pH before any work could be done.  Relying on his years of experience, Rich developed a method for saving the extensive window and door paneling and millwork from demolition. He accomplished this by neutralizing the substrate, carefully sanding and repairing the damaged wood fibers and selectively applying Dutchmen patches to severely damaged portions of the moldings and panels.

The meticulous and painstaking methods of repair and preservation that Rich Muckle and M&A Architectural Preservation brought to the project allowed the Smithsonian to save original millwork that might otherwise have been discarded. What Walt Whitman once called, “the noblest of Washington buildings” remains truer to its original form because of the expertise and diligence of the M&A team. To see more about the preservation project archpres.com/national-portrait-gallery/ To discuss collaboration with the experts at M&A Architectural Preservation contact us at 978-683-0880.

The Massachusetts State House sits regally atop Beacon Hill. From the outside an observer would…

“The greenest building is one that is already built.” If you think that modern building…